Licensing for Backup Exec has been consolidated into three editions: Bronze, Silver and Gold and can be licensed as either Perpetual or Subscription. Custom Edition (à la carte licensing) is still available as Perpetual for both new and renewing customers. All existing Backup Exec customers using à la carte, V-Ray, Capacity or Capacity Lite editions with current maintenance can access the features included in Backup Exec 20.3 and can add to existing entitlements using their current model and continue to renew maintenance based on the edition in use. Customers with existing editions and the older licensing models can cross-grade to Bronze, Silver or Gold editions to take advantage of the greater usage flexibility, ease of maintaining a single license, and cost savings.

A perpetual license allows customers to use a specific version of a given software program indefinitely with payment of a single fee. With perpetual licensing, customers pay an upfront charge for the software license as well as a limited maintenance period during which additional support options are included. After the support period ends, customers have the option of continuing to use the current version of the software without additional support or paying additional fees for support and upgrades.

The Backup Exec Bronze, Silver and Gold offerings include unlimited deployment of the Backup Exec server, options and agents, as long as the number of front-end terabytes (FETB) of data being protected does not exceed the number of terabytes specified by your license, with a minimum of 1TB license per Backup Exec server. You may purchase licenses for as many TB as you need based on the amount of data that needs to be protected. Download the Veritas Capacity Assessment Tool to calculate the amount of data, in TB, on the servers in an environment to provide information about the number of licenses needed to protect these servers. Discounts on perpetual and subscription capacity-based offerings are available for higher data volumes. Tier discounts will be applied at the time of transaction on individual order line quantity. The quantity tiers are: 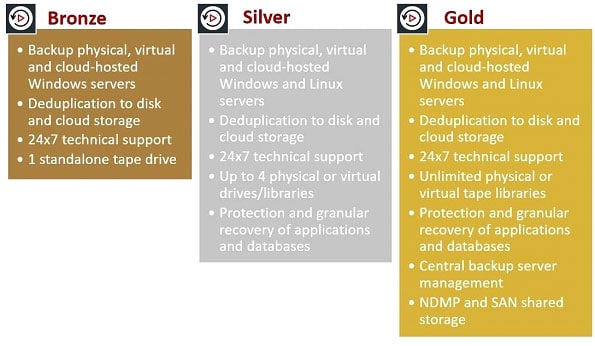 Backup Exec allows you to purchase licenses for the total number of front-end terabytes (FETB) needed and allocate different capacity licensing to different Backup Exec servers, including those on different sites.

For example, you can purchase a license for 12 FETB and distribute or allocate across multiple servers, such as 4 TB to Server A and 3 TB each to Servers B and C and 2 TB to Server D.  In this example there would be 12 TB available and 12 TB allocated among 4 servers. To add capacity to any of these servers, the new license must be the same Bronze/Silver/Gold edition as the existing license.  In this example if 2 more TB were purchased, there would be 14 TB available and 12 TB allocated.   Servers with allocated licensing do not have to be centrally managed.

Backup Exec 21.0 introduces instance meter that allows you to purchase licenses based on the number of instances that you want to protect. When licensed on instance basis, you must purchase instances in groups of 10. An instance is defined as a protected Windows, Linux, Unix or NAS instance, such as a virtual machine, a cloud computing instance or a physical system in the datacenter.

Bronze, Silver and Gold Editions by Agents and Features

V-Ray Edition protects virtual environments only. V-Ray licenses are sold per CPU socket of the hypervisor host and allow you to protect all the guests and supported applications and databases running on that hypervisor. V- Ray Edition is available as perpetual. V-Ray Edition can be mixed with select Custom Edition (a la Carte) licenses to add on features that are not included in the V-Ray Edition and to extend protection to physical environments.

The Custom Edition allows you to purchase Backup Exec by individual options and agents to meet your backup needs. Specific agents and features are licensed as separately priced items selected from a menu (à la Carte). Each agent or feature in Custom Edition must be licensed for specific use per server.

The Capacity Lite and Capacity Editions offered a convenient way for customers to obtain all product features in a single license, based on the amount of Front-end Terabyte. V-Ray Edition protects virtual environments only. These editions apply to existing customers extending or renewing their existing Backup Exec Edition licenses.

Unlimited*: Includes unlimited deployment – restricted only for use in VMware & Hyper-V virtual Machines running on the licensed host.

There are no reviews yet.